All Collections
Moderating ideas
Advancing ideas in a funnel challenge

Advancing ideas in a funnel challenge

In a funnel challenge, ideas must pass through timed stages; moderators decide which ideas will pass to the next phase. Funnel challenges are designed to make it easy for community administrators and moderators to start with a large number of ideas and then to gradually reduce this number by allowing fewer ideas through as the challenge passes through the phases.

Administrators can set up the phases in a challenge so that either all of the ideas will automatically advance to the next phase, or so that only the ones that are selected by moderators will advance. If the idea needs to be manually selected by a challenge moderator, it will sit in an 'Undecided' state until a moderator decides to advance it: 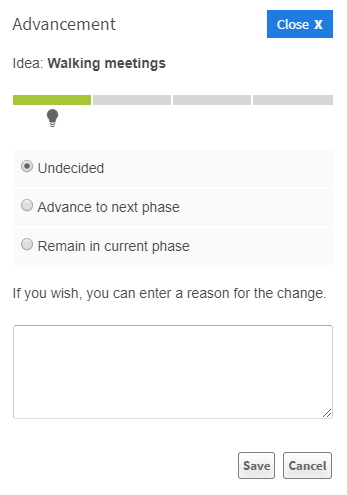 If a moderator doesn't choose either Advance or Remain, the idea will remain in the phase it was posted in.

To advance an idea in a funnel challenge:

2. This will open a pop-up window with the Advancement options for that idea. You can choose whether the idea should advance to the next phase, stay in the current phase, or move back to the previous phase.

3. When you have made your selection, click Save to close the window. 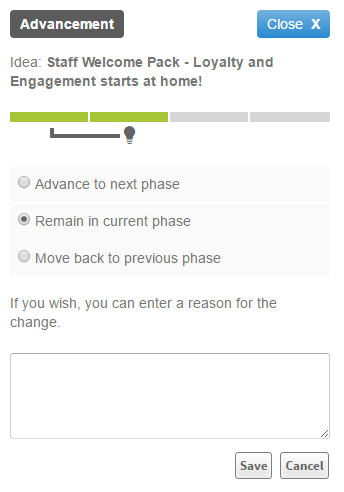 Each section of the Advancement bar represents a phase of the challenge, if you hover over a section you’ll see a tool tip with the name of phase it represents. Sections representing phases that haven't started (future phases) are coloured grey. When a phase starts, the corresponding section turns green and remains green when the phase has finished. 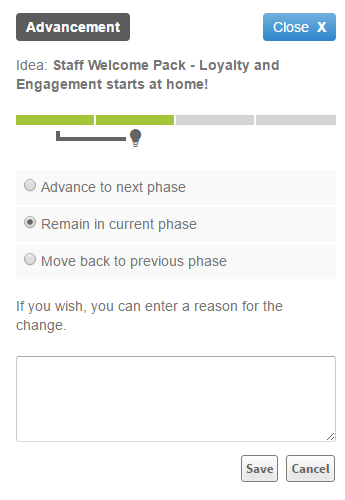 If an idea is advanced into the next phase, the dark line under the Advancement bar shows in which challenge the idea was first posted, and the position of the light bulb shows which phase it has progressed to. In the example below, the idea was posted in the first phase and was advanced to the current phase (the second one).

As you select the different Advancement options in the pop-up window, the Advancement bar will change to reflect the choice that you have made, showing you which phase the idea will be in when you confirm your choice.

If you have choose to advance an idea to the next stage, there will be a new status label on the idea page: In next phase.

As well as the idea status label, there is also an Advancement bar on the idea page, underneath the idea stats, that shows which phase the idea is in.

The idea status label and Advancement bar on the idea's page is visible to any users that can view the idea page.

You can moderator ideas in bulk from the challenge page, select more than idea and applying the same moderator action to all of those ideas.

To select multiple ideas that you'd like to advance:

1. When viewing the challenge page, mouse over an idea to start your selection. As you do this the idea will dim and a tick box appears in the top right corner of the tile. Tick this to select your first idea. 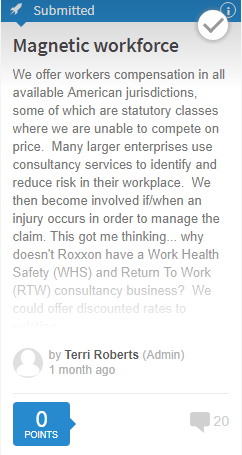 2. Once an idea is selected, the moderator tool bar will appear above the idea list. You will also see the option to add additional ideas to your selection by ticking them in the same was as described above. Ideas that you have selected will have a blue outline and a solid tick in the checkbox. 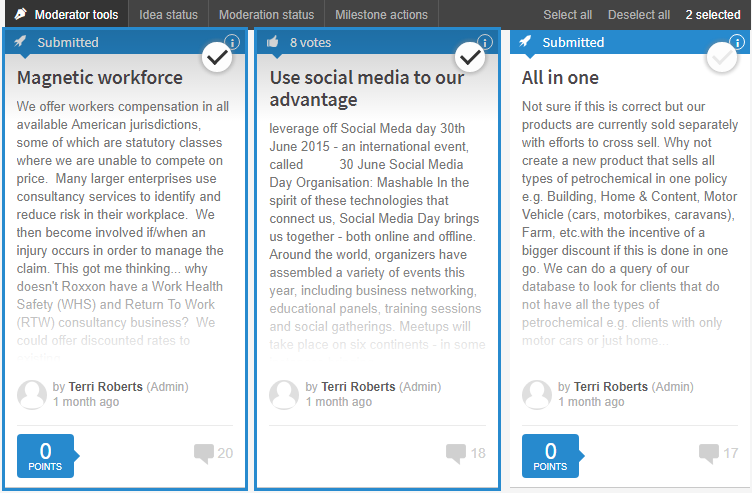 3. When you have selected the ideas that you want to advance, click Advancement to bring up advancement options (this is the same as shown for a single idea, above). 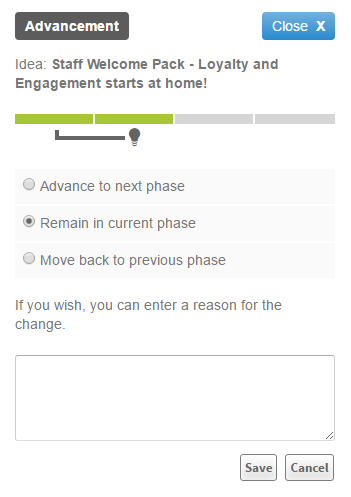 4. Choose the action that you want to perform on all selected ideas and click Save