All Collections
Understanding challenges & ideas
Posting an idea with other users

Posting an idea with other users

In some challenges, the administrator of your community may have enabled joint submissions; the Joint submissions feature allows you to add a co-author to your idea. Co-authors can be people who have worked on your idea with you or those that have agreed to help you develop your idea after you post it.

If a user is added as a co-author on an idea, that user gains the same permissions and rights as the main idea author:

If a co-author is added to an idea after it has earned some points (eg if people have voted for it), the new co-author will receive any points that the idea has earned up to that point, as well as any that it earns after they've been added.

For example, if you have worked on an idea with someone who wasn't originally in your community, you can add them to the idea when they do sign up and they still get credit for the work they put in!

How to add a co-author

If Joint submission is turned on for a challenge when you post an idea, you will see a box at the top of the idea submission page that offers you the opportunity to post by yourself or with others. 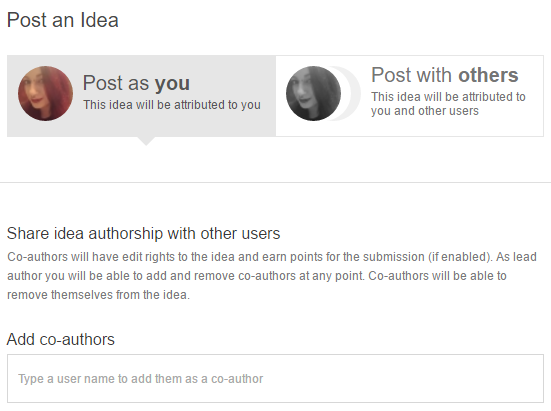 In the box, type the username the person who is submitting the idea with you. You can add up to 10 co-authors to an idea by putting a comma after each name, to separate them.

Any users that you add as co-authors will be sent an email, to let them know that you've added them to your idea.

If you have been added as a co-author you do not need to do anything to confirm this, it happens automatically.

If you do not want to be a co-author, you can remove yourself from the idea at any time by viewing the idea and then clicking the 'Remove myself from this idea' button.