Voting wallets can be useful as they force your community to think more carefully before they cast their vote: when votes are limited, users will be more careful how they use them.

When you add a voting wallet to a challenge, users will see a message on the challenge page that tells them how many votes they have left. 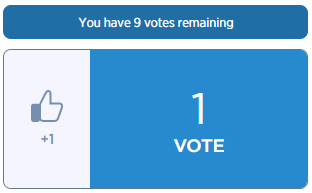 If a user runs out of votes, they will receive an error message if they try to vote on another idea.

If users cancel their vote on an idea, that vote will go back into their wallet, and they will be able to choose a different idea on which to vote.

If you have chosen Thumbs up/down, Thumbs up, Star rating or Scorecard voting, votes are classed as one rating of an idea.

If you are using a vote wallet with Points then users can allocate the points to as many ideas as they choose. Users can choose how they 'spend' their points: either giving one idea many points, or giving out a low number of points to many different ideas, spreading them out.

For example, if you allow users to give up to 10 points per idea, and then give them a voting wallet of fifty they could either give 10 points to 5 different ideas, or 1 point to 50 different ideas.

Adding a voting wallet to a challenge

To enable a voting wallet for a challenge:

1. Go to Challenge Management, find the challenge that you want to add a voting wallet to and click Edit.

2. Go to the Settings tab and select the voting type that you want for the challenge (eg thumbs up, star rating, etc). For funnel challenges use the Challenge Type tab to change the voting type per phase. For milestone challenge, voting wallet is not available. 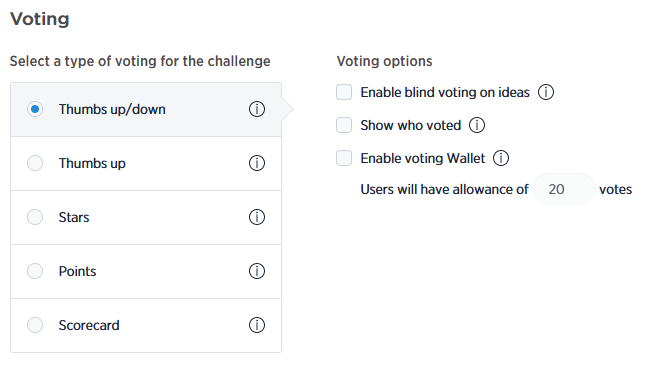 3. Tick the box next to Enable voting wallet, choose the number of votes you want users to have and click Save.

If you add a voting wallet to phases in a funnel challenge, the wallet does not roll over between phases, users can only use the allocated votes in that phase.

How many votes should you put in the wallet?

Voting wallets can be a very powerful tool to help you understand users' opinions of the ideas in a challenge, and it is important to spend some time thinking about how many votes you would like to allocate to each user.

The first factor to consider is whether you are using Points voting, or one of the other types of voting. If you are using points voting, then remember that users will be able to give more than one of their 'Votes' to an idea, so you should allow more votes in voting wallet.

You should also take the size and activity levels of your community into account: if there are going to be lots of ideas posted in the challenge, then users will need more votes in their wallet!

The final thing to think about before you set up a vote wallet is how selective you want users to be. For example, if you are tying to find the absolute best ideas, and don't want to have too many at 'the top', you could only include 3 votes in the wallet, that way users can only vote for their three favourite ideas.