D
Written by Dana Luther
Updated over a week ago

Moderators can move ideas between challenges, and to a different theme in the same challenge.

This can be helpful if a user accidentally posts an idea in the wrong place, or if you feel that an idea would be more suitable for a different challenge.

Moving an idea from one challenge to another is done through the Moderator tool bar, the black bar that is visible above the idea title.

You will only see the moderator tool bar if the idea is in a challenge that you are moderating.

To move an idea:

1. Go to the idea that you would like to move and select Move on the Moderator toolbar.

2. The Move to drop-down menu gives you a list of all challenges (or themes within challenges) to which you can move the idea. This includes any challenges that are archived or closed. 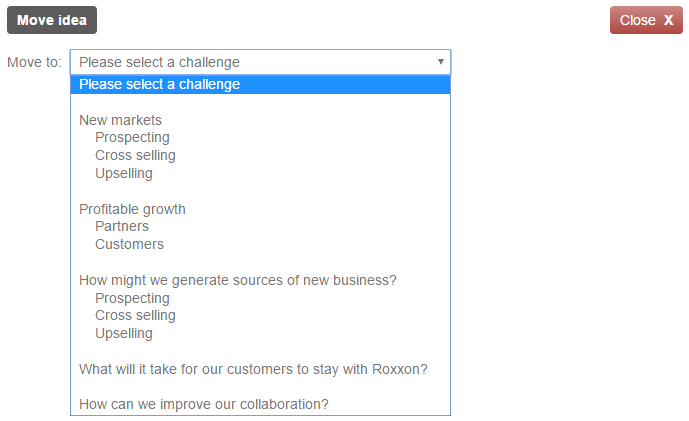 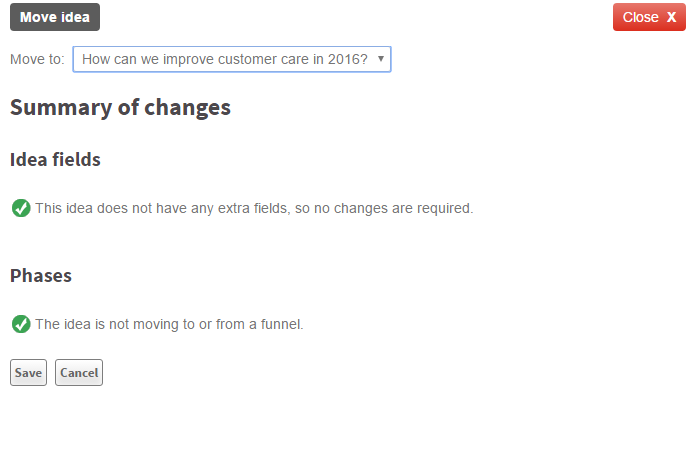 4. If you are moving an idea to or from a funnel or milestone challenge, or if it has additional fields, you will need to follow the on screen instructions. Once you have completed any instructions, click Save to move the idea.

If you move an idea from a standard challenge to a funnel or a milestone challenge, the idea will start at the beginning in either the first Milestone or the first phase.

Moving ideas that have additional fields

If the challenge asks users to provide more than a name and description of their idea, when you move the idea you will need to decide what will happen to those additional fields.

When you have selected the challenge to which you'd like to move the idea, you will be presented with an option to Append or Discard the information in each additional field. 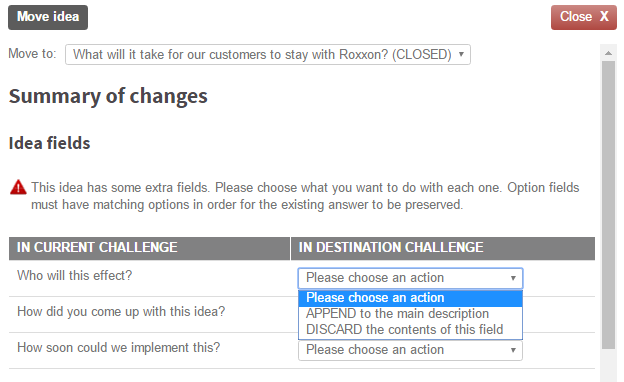 If you choose to Append the answers. The questions and answers will be added to the end of the idea text in the new challenge. 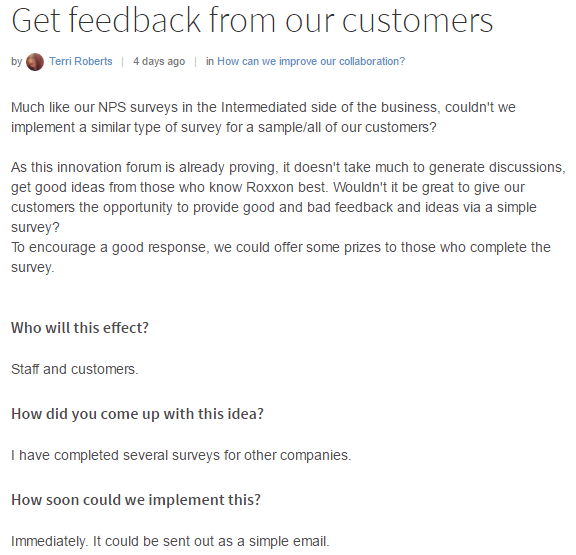 If you choose to Discard the answers, the information in the additional fields will not be visible at all when the idea is moved to the new challenge.

For example, if two challenges ask the same additional questions, you can choose to move the answers to specific questions into the additional fields of the destination challenge.

If you would like to transfer the contents of an additional field in an idea from one challenge into the field of a destination challenge to a field in the new destination to the new challenge, select the => Into text field option on the question you'd like to add it to. Once you have selected where you would like each answer to show, click save to complete the move process.

If you are moving an idea into a challenge that has a different type of voting to the original challenge, the existing votes will not be visible in the new challenge. For example, if an idea has been given 6 thumbs up and you you move it to a challenge with star ratings, the 'thumb' score wont be visible, it will be as if the idea had no votes.

Moving ideas into a milestone challenge

By default, when you move an idea to a milestone challenge, it will be placed at the first milestone, Submitted. It is possible for ideas to progress automatically if they have fulfilled the requirements to reach the milestones in the challenge.

Similarly, if your first milestone target is a refinement one, and the idea has already answered the required additional fields, it will automatically progress to that milestone.

Ideas must still progress along the milestones in order. For example, if an idea had 20 thumbs up and the second milestone was a vote target of 20, but the first milestone was an approval milestone, the idea wouldn't be able to progress until it had been approved. When it approved, it would then automatically hit the vote target milestone.

When an idea is moved to a Funnel challenge, it will move to the phase that is currently in progress. It is not possible to move an idea to a phase that has already ended or not yet started.