All Collections
Understanding challenges & ideas
Reporting an idea or comment

If you think that an idea or a comment is inappropriate or offensive, you can report the post to moderators and administrators in the community.

If you need to report an idea, click on the flag at the top of the idea, near the idea title.

In both cases, a window will then open to ask you for the reason that you are reporting the idea/comment. 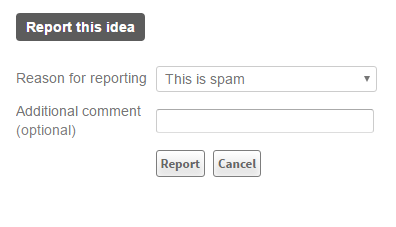 You can select one of the following reasons:

There is also a box where you can type any additional comments you may have to explain the reason that you are reporting the post.

When you have made your choice, click report. An additional window will open to ask you if you are sure that you want to report the idea/comment. If you are sure, click OK. You will see a message that tells you your report has been submitted.

What happens after an idea or comment has been reported?

An idea that has been reported will now have a red flag in the top right corner and will also have a tag saying 'Pending moderator attention'. If you can't see this immediately after you've reported an idea, try refreshing the web page.

If you report a comment, a red flag will be in the corner, in place of the arrow. Again, if it is not immediately visible, trying refreshing your web page.

In some communities, when you report and idea or comment, it will be removed from the community until it has been approved by moderators.

When you report content in the community, an email will be sent to moderators to inform them that a post has been reported. They can then review the idea or comment and decide whether to approve it, edit it or remove it.